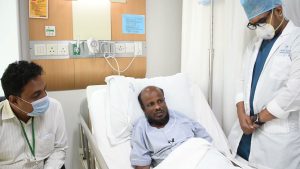 Many people do not give much importance to indigestion or gastric. Shafiqul Islam had been suffering for a long time until his visit to Dr Mohammad Farid Hossain at Evercare Hospital Dhaka. According to the doctor’s advice, various tests were performed on the gentleman’s large colon to find countless polyps of various sizes, along with two large tumors carrying the cancerous germ in the lower rectum. These rare diseases are inherited and can be cancerous. Despite the the dilemma the patient agreed to undergo Laparoscopic Pan proctocolectomy with Ileostomy at Evercare Hospital Dhaka. The operation was successful because of the tirelessly working doctor and Evercare Hospital Dhaka team. On one hand this put an end to the long term physical pain of the patient while on the other hand the first registered Laparoscopic Pan Proctocolectomy operation in the country was completed. Due to the nature of the operation and the complexity of it, Shafiqul Islam expressed his lifelong gratitude to Evercare Hospital Dhaka, Dr Farid & all concerned for releasing him from this physical misery that went on for ten long years.